After listening to the Daniel Morgan podcast, Untold, I became really interested in the murder investigation. To help me follow it I started building a network of all the key people, organisations, and events in the case. The networks this produces can be seen here,and you can keep up-to-date with the progress on the network here.

There is an updated network image here.

The story is a compelling one, I suggest you either listen to the podcast or read the book. Very briefly it looks into the murder of Daniel Morgan, and the subsequent investigations into the murder and the police handling of the murder. The book builds a compelling story of decades of struggle by the Morgan family to get justice, and the difficultly they have had in discovering the truth.

The network is not complete, at the time of writing I have only put in the ‘easy’ bits. The network stores objects as the nodes, so people, companies, organisations. The lines, or edges, store the relationship between the objects, e.g. Alistair Morgan is ‘brother_of’ Daniel Morgan. The visualisation is produced using Alchemy, and the data is stored in Neo4J. I intend to continue to develop the network further, and the visualisation which needs things like edge labels. Once the network is more complete it would be interesting to see if there is any useful analysis that can be done on the network. It would also be interesting to expand the data to include other related and interesting cases. Such as the Stephen Lawrence murder, and the Leveson Inquiry will likely form a part of Algorithmic Indexing in the future.

Here is a picture of the network in Neo4J: 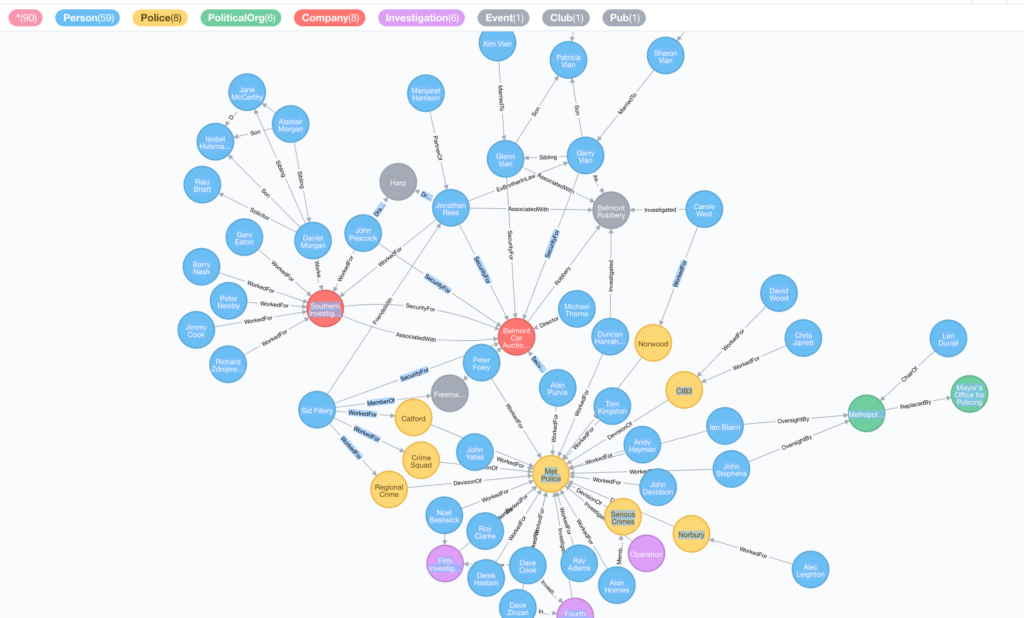 Part of the network of actors in the Neo4J database.